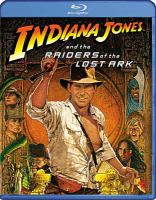 Indiana Jones and the Raiders of the Lost Ark

Raiders of the Lost Ark is a 1981 American action adventure film directed by Steven Spielberg, starring Harrison Ford. This was the first installment of the four part film series, with a fifth episode rumored to be released in 2021. This film was a trailblazer of its time, making archaeology one of the most sought after and fantasized about careers. It is chalk full of so many iconic action set pieces and moments that permeate today's pop culture. Everything from running from the impending boulder, to swapping the golden idol with sand, to the face melting ending, this film is a memory maker. Spielberg's excellent directing build the foundation for Harrison Ford’s performance as one of the most suave, charismatic and enviable film heroes of all time. It is one of the most entertaining two hours of film I have ever had the privilege of watching, and to this day brings me nostalgia while reviewing it. Raiders of the Lost Ark is one of the most stylish and characteristically American adventure movies ever made, harkening back to old-time movie serials and episodic adventure shows. Raiders provides an entryway to the next films, each of which have their merit, and I would recommend watching them all. 4.5/5 Stars. @Joaquin of the Hamilton Public Library Teen Review Board

The scene at the end with the Nazis definitely scarred me as a kid, but this is a great action/adventure film!

Originally I had decided to take a chance on the movie due to an episode of "The Big Bang Theory," but I was glad I did. Just ignoring the little things that I have picked up over the years about the film, I really enjoyed it. The fight scenes, the romance, and the plot was exciting and entertaining.

For the sort of movie that it is (a children's action adventure, like an unanimated cartoon) its five stars. If one is a child, it would be fun to watch. But, for normal people, its so hokey and immature that it takes some effort to sit through it.

Excellent film. The story works well and the special effects still hold up very well. Originally rated PG (PG-13 wasn't created until after the release of Temple of Doom and first used for Red Dawn), it's violent and scary in places, but still tame by some of today's commonplace. This is one of those must-see movies. Highly recommended.

It is a little violent, I will admit. I would recommend this movie to teens and adults, I would not recommend it for kids. Aside from the adventure and action movie, there was a humorous side. I was rolling on the floor when the Nazi's heads exploded, imploded, and melted at the end.
George Lucas brought Harrison over from Star Wars to play in this film. I think both roles as Han Solo and Indiana fit him well.

The original Raiders movie is a rather terrific action adventure. If Star Wars didn't exist, Harrison Ford would still have a top billing career off of this one performance.

It was like a roller coaster - non-stop action almost the entire way! I enjoyed the film, although the superstitious views held by the Nazis and other people surrounding the Ark of the Covenant put me off.

canadianchildhood thinks this title is suitable for 8 years and over

Yavin thinks this title is suitable for 12 years and over

sofa2001 thinks this title is suitable for 14 years and over

FriendsDragonsCats44 thinks this title is suitable for 10 years and over

picklepepper26 thinks this title is suitable for 12 years and over

williammoon123 thinks this title is suitable for 7 years and over

maxymaxdog thinks this title is suitable for 9 years and over

Conrad_JD_777 thinks this title is suitable for 10 years and over

IvanBello thinks this title is suitable for 13 years and over

bdls206 thinks this title is suitable for 10 years and over

Frightening or Intense Scenes: The ending on island with the ark. Saying anymore than that could be considered spoiler-ish.

Violence: The usual violence from period pieces. A bit more bloody than I remembered, but mostly of the true is off-screen.

Violence: Lots of people died. The show wasn't that scary though, even though people were shot, burned, shot by poisonous arrows and flew of the side of a cliff. :3

Frightening or Intense Scenes: Same thing. Just lots of skeletons that are realistic looking. Lots of blood, though it looks like someone just splattered nail polish all over. And the part with people melting is pretty creepy.

Violence: Much violence! If I were to tell what, I would be restating what everyone else has said.

Frightening or Intense Scenes: Skeletons, humans peppered with poisoned arrows, poisoned small monkey, and "melted" human faces are some of the frightening images. A jeep and several villains plunge off a road over a cliff.

Violence: fighting with punches and gunfire,

Indiana: "Did it have to be snakes?"

Indiana: Meet me at Omar's. Be ready for me. I'm going after that truck.

Indiana: I don't know, I'm making this up as I go!

Marion: You're not the man I knew ten years ago.
Indiana: It's not the years, honey, it's the mileage.

Toht: You Americans, you're all the same. Always overdressing for the wrong occasions.

Satipo: Let us hurry. There is nothing to fear here.
Indiana: That's what scares me.

Belloq: How odd that it should end this way for us after so many stimulating encounters. I almost regret it. Where shall I find a new adversary so close to my own level?
Indiana: Try the local sewer.

Archaeologist and adventurer Indiana Jones is hired by the US government to find the Ark of the Covenant before the Nazis.

Indiana jones is on his first adventure, to gain the famous lost ark and put it where it belongs, in a museum. The Lost Ark contains unimaginable power and the Nazis are after it, it is up to Indiana to get it away from them and into safety. With his love interest at his side he creates an adventure that lasts a life time.

Find it at Library